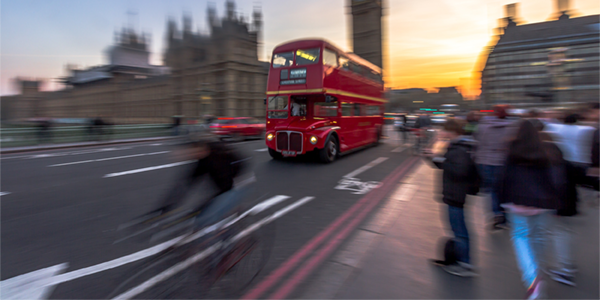 Photo by Bruno Vieira on Unsplash.

Because London has more cars than it has parking spaces, driving in London is like a huge game of musical chairs. The lucky few have parking spaces by their home or office but the majority of us are doomed to drive around and around in circles hopelessly searching for empty stretches of kerb. A while back, this got even more difficult: on certain main roads yellow lines indicating a parking ban were replaced by red lines. Unlike yellow lines, single and double red lines ban all stopping, parking and loading.

Roads with red lines on them are known as red routes: these are the key road arteries in London. The idea is that these routes need to be kept clear in order for traffic to move smoothly through the capital (we're told that just one driver can clog the roads). Transport for London is uncompromising in its enforcement of parking restrictions on red routes. Make the mistake of stopping your car on a red route to buy your daily paper and traffic wardens converge on you from nowhere.

The motorist's loss proved to be the bus passenger's gain. Research showed that bus journeys were 10% quicker and 27% more reliable. Journey time reliability improved by 20% and red routes led to a 6% reduction in accidents.

Improvements in speed and accuracy need not only apply to bus routes. We can get analogous gains by applying the red route philosophy to web sites. By adopting the role of enthusiastic traffic wardens and treating usability obstacles on red routes like badly behaved motorists, we can ruthlessly eradicate any usability obstacles on the key user journeys. To begin, we need to map out the red routes for our site.

In defining red routes, it's important to consider both the frequency and critical nature of the activity. Activities that customers carry out frequently are crucial to the success of the web site since they will determine customers' perception of it. One example of a frequent activity might be search. In contrast, critical activities may be infrequent but users will hate your web site if these tasks are not well supported. An example of an infrequent but critical task might be editing my personal details stored on a web site. Finally, activities that are both frequent and critical are the web site's bread and butter. Get these wrong and you may as well not be in business.

But this list of red routes is only part of the story. Visitors to your site will have their own goals that your site needs to support. Some of these goals — like buying a product — will match your organisation's goals. But there will be others that may not seem that important to your organisation but that are critical if customers are going to do business with you.

For example, if you run an e-commerce site, one of your customers' goals will be to check that they are getting value for money. Making a decision to buy is difficult. There is always a nagging feeling that you can get the same product cheaper elsewhere, and that a different model might be a better fit for your needs. Consider the act of buying a new MP3 player. There's always the risk that the device you have bought will have poorer battery life than another model, or the audio quality might not be as good, or the screen might be harder to read. As a seller of MP3 players, this isn't a big deal for you (other than the risk of returns for truly awful products). But for a purchaser this is important information. So we also need to define 'choosing' a product as a red route, and this might include links to independent reviews, testimonials from other customers and even showing comparative prices from competitor sites.

If you look at a map of London with the red routes superimposed upon it, there doesn't appear to be an obvious visual logic to the design. This is because London's archaic road system was never designed to handle the traffic that now runs through it, and just like water running downhill certain routes have just evolved based on usage. With a web site, we can be more proscriptive. To be useful, red routes should have the following five characteristics.

Base your red routes on real customer data

One way of defining red routes (admittedly, not a good one) is to simply make them up. We can all tell a good story as to why someone, somewhere, will want to do a certain activity at our web site. For example, when working with a recent client I was told that a typical customer red route was to "read the latest news about the company". We could justify this red route by making up a story about a journalist on a particular slow news day that is casually surfing the web waiting for something interesting to turn up. And thanks to the benefit of groupthink we might even believe it for a while. But it's unlikely this will ever be a red route from a real customer's perspective.

A better way is to carry out some research with customers. This doesn't mean hiring a market research company to run a focus group and it need not mean carrying a clipboard and stopping people in a shopping mall. This is because you probably already have a lot of customer data that you can mine for this activity. For example:

The next step is to take these red routes and use them to evaluate your current design.

Focus groups continually fail to tell us what customers want. The fundamental problem is that, in spite of what conventional wisdom tells us, it is not the voice of the consumer that matters. What matters is the mind of the consumer. Is Consumer Research Losing Its Focus?